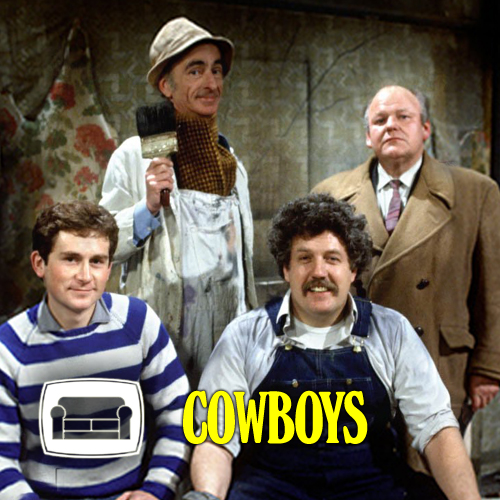 In the world of sitcom creation, not all success stories stem from a performing or writing background: John Sullivan left school in the early 1960s without any qualifications, taking all sorts of odd jobs to make ends meet before joining the BBC Props Department in the 1970s. Carla Lane had gone into nursing after finishing her education, before teaming up with Myra Taylor to create The Liver Birds. Eric Chappell – writer of Rising Damp as well as being an amateur playwright – was an auditor for the East Midlands Electricity Board for twenty-two years.

Learmouth’s route into comedy is as interesting as any of his contemporaries; a one-time folk musician, painter, decorator hospital worker; career choices that were reflected in his sitcoms.

His big break was Cowboys; the programme ran for two series between Sep 1980 and Dec 1981. Its main performers were Roy Kinnear, David Kelly, Colin Welland and James Wardroper.

Kinnear was, of course, a comedy stalwart; he first came to public attention in the 1960s satire boom with That Was the Week That Was, moving into more conventional sketch comedy in The Dick Emery Show and appearing in another Thames sitcom, George and Mildred.

In Cowboys, Kinnear played Joe Jones, a former used car salesman, now owner of a small building firm, Joe Jones Ltd; seemingly, he has only three employees: Geyser, Wobbly Ron and Eric. Mr Jones – habitually unable to criticise any of his staff – has a custom of rolling his chin on his chest when ill at ease. In addition, he’s enamoured of his secretary Doreen, played by model Debbie Linden in the first series.

David Kelly – most recently seen as one-armed washer upper Albert Riddle Thames’ Robin’s Nest – played Wobbly Ron, a painter and decorator. Ron’s persistent wobble was caused by his liking for alcohol; if not slurping from a bucket full of turpentine, he was usually to be found outside a pub at closing time singing ‘I Knew Lloyd George’s Father’.

Actor and playwright Colin Welland played Richard Geyser, a plumber with a capacity to reason out an argument. Welland was a familiar face to viewers of this era, more so for dramatic roles in series such as Z-Cars.

Completing the team is Eric, the van driver played by James Wardroper whose signature move was to perform a punk pogo jump and shout, ‘Knockout!’. Eric had a skill for causing van breakdowns if not crashing them; in the first episode, he manages to smash the company vehicle into Woolworths – specifically, by the Pick ‘n’ Mix sweets.

Cowboys was one of many sitcoms to launch on British television during the first year of the new decade; Hi-de-Hi!, Sink and Swim, Oh Happy Band! and Yes, Minister all commenced on the BBC, whilst on ITV The Other ‘Arf (ATV), The Glamour Girls (Granada) and Pig In The Middle (LWT) debuted. Peter Learmouth was later to write episodes of Thames’ other big sitcom offering for 1980, Keep It in the Family.

I asked Peter how he got his break into sitcom writing and how Cowboys came to fruition.

“Michael Mills – the head of Comedy at Thames Television – gave me my break in TV after a friend of mine, Ian Osborne – who worked in the sound department there – passed Mills a script of mine, so I have a lot to thank him (and Ian) for.

“One thing I particularly remember about Michael Mills: having worked with Michael Crawford on Some Mothers Do ‘Ave ‘Em, he was a big fan of stunts and would be gleeful if I wrote something like, “Whole house falls down’ or, ‘Wobbly drops through a hole in the roof.’”

Mills went on to direct and produce the show for its ITV run, which began on 3rd September 1980 at 8.30pm (following the first regular series edition of Thames’ Morecambe and Wise Show).

Another key name in the commissioning process was Philip Jones, Head of Light Entertainment at Thames Television; Jones’ track record reads like a who’s who of sitcoms with Bless This House and George and Mildred to name but a few of the successes which the company enjoyed.

Peter recalled his memories of the celebrated producer-turned-executive: “I only met Philip Jones a few times. He was always very nice to me and gave Cowboys the green light after we taped the pilot, so I have that to thank him for.”

The first series saw Joe Jones’ band of builders having to deal with renovating a house for the council, dealing with local building regulators, trade unions and ‘woman trouble’ when on the firm’s annual works outing. The premise encapsulated a common theme in consumer news during the early 1980s; the name ‘cowboys’ had become popular slang, alluding to such operators riding into town, producing shoddy work and riding out again.

The theme music for Cowboys was written and performed by rock and roll singer, Joe Brown; “If a job’s worth doing, it’s worth doing wrong”, setting the mood for the antics ahead. With the success of the first series, a second run was commissioned, beginning in November 1980.

Once again, we see Joe Jones Ltd facing financial problems, with no cash flow and no prospects apart from bankruptcy; to rescue the company in the first episode, a big job comes along – the only trouble is that they have no paint. Luckily though, Wobbly Ron knows a man who does.

Joe required a new ‘personal’ assistant, with Doreen leaving the company (Debbie Linden departing after series one). The new arrival – in the second episode of series two – was to be Janine Duvitski playing Muriel Bailey; by 1980, Duvitski was most famous for the role of Angie in Mike Leigh’s Abigail’s Party, both on stage and television, before later being cast as Pippa, the long suffering wife of Patrick (Angus Deayton) in One Foot in the Grave.

When Muriel negotiates a good price for the repointing of a curved brick wall, the only trouble is that she’s forgotten to take the address, leading to Geyser, Wobbly Ron and Eric trying to locate the wall in question. Come episode four, the workforce have been building a luxury house, though things go awry when they fail to read the architect’s drawings properly, whilst the fifth and final episode sees Geyser, Wobbly Ron and Eric strike lucky whilst digging the foundations of a new bungalow; however, this leads to greed, dissension and violence between them.

Around this time, Colin Welland had been writing a script for a screenplay; the story of Eric Liddell and Harold Abrahams, British athletes competing at the 1924 Olympics, would become the Oscar-winning Chariots of Fire. What were Peter Learmouth’s thoughts on working with such an accomplished actor and writer as Welland?

“Colin was something of a mentor to me. He was generous with his time, inviting me to his house for a chat about the scripts and writing in general. This was at a time when his star was very much in the ascendant – Chariots of Fire was becoming a bit of a sensation – so I was proud to be working with him.

“He gave me some valuable tips and even introduced me to his own agent, who took me on. But he never tried to make the scripts his own; he wasn’t pushy like that. Of course, all actors make little suggestions from time to time, and he was no exception. Some you take on board, some you don’t. After all, we all want she show to be as good as it can possibly be. But most actors have enough on their plate just learning their lines in what is often just a few days.”

Finally, ‘Middle for Diddle’ has Geyser challenging a fellow firm of builders run by Harry Riley (Bruce Montague) to a darts match. Mr Jones sees an opportunity to make some money, but Riley has other plans by nobbling Wobbly Ron, the star player of Joe’s team.

How did the episode ‘Operation Douche’ relate to Peter Learmouth’s previous employment experiences? We’ll find out in the second part of my interview, coming soon. Peter also discusses his later work including the BBC series Let Them Eat Cake, working with Rik Mayall and his thoughts on the world of sitcoms in general.

More US Sitcoms Of The 21st Century

US Sitcoms Of The 21st Century